I’ve just posted a review on the effects of alcohol taxes on alcohol consumption—and on the lives that alcohol abuse can cost. This literature review is unusual in the degree to which it replicates the studies it examines, so I have called it a “replication review.” Data, code, and spreadsheets are here.

The literature on this topic is large, and at first glance it seemed that the high-quality studies contradicted each other. Yet as I dug deeper, I found a pattern: the larger the experiment—the larger the price change—the clearer the effects. In the end, I believe the preponderance of the evidence says that higher prices do correlate with less drinking and lower incidence of problems such as cirrhosis deaths. And I see little reason to doubt the obvious explanation: higher prices cause less drinking. A rough rule of thumb is that each 1% increase in alcohol price reduces drinking by 0.5%. Extrapolating from some of the most powerful studies, I estimate an even larger impact on the death rate from alcohol-caused diseases: 1–3% within months. By extension, a 10% price increase would cut the death rate 9–25%. For the US in 2010, this represents 2,000–6,000 averted deaths/year.

Why I looked into the literature on alcohol taxation

Last November GiveWell convened a daylong meeting in Washington, DC, to gather and test ideas for priorities for our work relating to U.S. policy. (See the page about the event or Holden’s post.) One potential priority that came up—but which otherwise has hardly been mentioned on GiveWell.org—was increasing alcohol taxes:

We have no particular reason to believe that the time is particularly ripe for reform in this area, but with alcohol excise taxes gradually diminishing in real terms at both the state and federal levels, it’s possible to envision work at either level.

One example of a prospect to exploit the current political environment is a successful 2011 campaign to raise alcohol taxes in Maryland. The campaign was carried out by a coalition of public health and progressive advocacy groups around the combined goal of reducing excessive alcohol consumption and increasing revenue. Many of the coalition members had previously mobilized together to support the Affordable Care Act.

The next day, Holden asked me to look into what is known about the impacts of alcohol taxes.

Alcohol taxation is not a top priority for Open Phil at the moment. Though we see the issue as uncrowded (which is promising), we see it as having only moderate importance compared to other causes we’re considering, along with highly uncertain political tractability. Nevertheless, our priorities can and do shift, and the issue seemed worth understanding better, particularly in light of the large body of studies on the topic.

An excerpt from the intro:

Heavy drinking is associated with many health and social problems, including liver disease, unsafe sex, domestic violence, homicide, and reckless driving. In 2012, 28,000 Americans died from alcohol-caused diseases. Another 10,000 lost their lives in alcohol-involved motor vehicle crashes, accounting for 31% of all motor vehicle deaths… Worldwide in 2010, the death toll from alcohol-caused disease was 155,000….

Many policies affect drinking and related behaviors: criminal penalties for drunk driving, the minimum drinking age, state monopoly of retail, advertising rules, regulations on when bars can be open and who they can serve, outright prohibition, and more. In the US, alcohol taxes have hardly risen in a generation—indeed, have been drastically eroded by inflation (see figure below). In 1990, President Bush signed a deficit reduction bill that included an alcohol tax hike (visible below); thereby, Bush broke his “no new taxes” pledge, weakened his reelection bid, and helped make tax increases anathema in American politics. Conceivably, increasing taxation is now the low-hanging fruit in alcohol control policy. 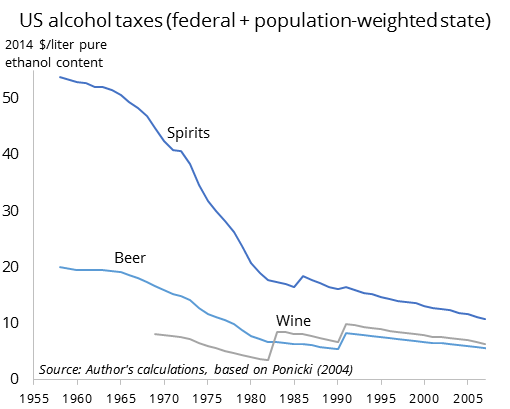 But if taxes are low-hanging fruit, how nutritious are they? How certain should we be that taxing alcohol reduces consumption in general and problem drinking in particular? How much illness, physical or social, would be averted?

Many studies examine the impacts of changes in alcohol taxes or prices. Nelson (2013, Table 1) finds 578. The literature is so big that it contains a sub-literature of systematic reviews…

Few of the underlying studies attain high-quality causal identification as that term is meant today in economics, exploiting randomized treatment or strong natural experiments. Here, I focus on the minority of studies that do use natural experiments—sudden changes in alcohol taxation in certain states or countries.

Superficially, the high-quality studies contradict each other. Alcohol tax cuts apparently did not increase problem drinking in Denmark or Hong Kong, for instance, but did in Finland and Switzerland.

Yet the overall pattern across the quasi-experiment studies is that the larger the experiment—the larger the price change—the clearer the effects. The 7% tax hike in Alaska on October 1, 2002, and the 18% cut in Finland on March 1, 2004, are leading examples. The simplest and most plausible explanation for the “null” results in other contexts is that their natural experiments were too small to produce unambiguous consequences.

Overall, in my view, the preponderance of the evidence says that higher prices do correlate with less drinking and lower incidence of problems such as cirrhosis deaths. And, as I elaborate, I see little reason to doubt the obvious explanation: higher prices cause less drinking. A rough rule of thumb is that each 1% increase in alcohol price reduces drinking by 0.5% (Nelson 2013, as discussed below). And, extrapolating from some of the most powerful studies, I estimate an even larger impact on the death rate from alcohol-caused diseases: 1–3% within months. By extension, a 10% price increase would cut the death rate 9–25%. For the US in 2010…, this represents 2,000–6,000 averted deaths/year.

How much a tax-induced price increase would affect violence and traffic deaths is harder to establish from the available studies. The clearest impacts in the literature have indeed been on the death rate from cirrhosis, in part because drinking is the primary cause, in part because heavy drinkers are presumably most sensitive to price, in part because the impact can be nearly immediate, making for easier statistical detection. (Although cirrhosis is a chronic disease, it is progressive, so that a sudden increase in drinking can speed death among those in whom the disease is most advanced. Seeley 1960.) Impacts on crime, suicides, and risky sexual behavior have been reported, but have not yet been demonstrated through strong natural-experiment–based studies.

Again, the full report is here. And for an interesting sidelight on the research, see my post questioning whether moderate drinking is healthy, which touches on the interesting idea of Mendelian randomization.

As we are continuing to learn about this issue, we welcome your thoughts.