This year, we’ve been looking into the cause of disease research. We’re trying to find outstanding organizations for donors interested giving to help out with research efforts to develop cures, or new treatments, to cancer and other diseases.

We figured that a logical place to start would be with two big-name organizations: the American Cancer Society and Susan G. Komen for the Cure. The first question we asked was “What do they do?”, and the first thing we found surprised us: funding research into cures or new treatments is a relatively small part of their activities.

The American Cancer Society’s 2008 IRS Form 990 demonstrates that ACS is not primarily a research organization. 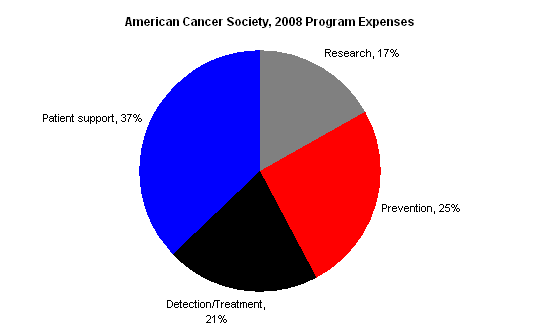 The 990 offers these notes to explain the different categories (quoted from Part III of the 2008 990):

Susan G. Komen for the Cure

Susan G. Komen’s 2008 audited financials paint a similar picture: it is not primarily a research (or research-funding) organization.

The chart below shows Komen’s 2008 program expenses, which include the central organization’s activities as well as those of the affiliates. 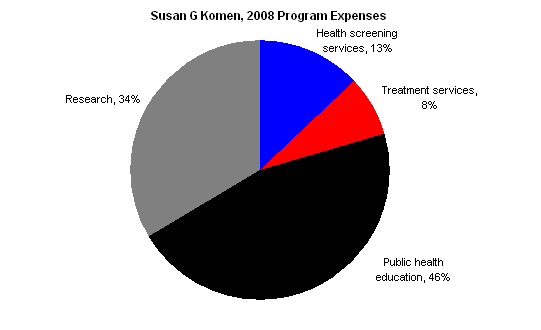 Komen has formed advisory councils to address the breast health and breast cancer needs of people from different cultures and backgrounds… We have developed a variety of educational materials for specific audiences in English and most are also available in Spanish… Examples of our education materials include – Breast Self-Awareness (BSA) cards in 12 languages for 14 specific audiences – General breast health and breast cancer brochures and fact sheets – Booklets with support information for survivors and co-survivors – Outreach resources including breast self-awareness information in CD-ROM, DVD or VHS formats.

We haven’t yet established anything about whether the American Cancer Society or Susan G. Komen is effective (or ineffective) at accomplishing their missions.

But we, at least, have been surprised by this fairly basic information.

I personally feel more negative on the two charities as a result of this basic check, because (a) I find research into cures/treatments as having a potentially huge upside in humanitarian terms, while public education and provision of existing treatments (in the developed world) don’t seem nearly so promising to me; (b) the “education” type activities are a red flag to me that research, specifically, may not have room for more funding.

Others may disagree, and I may change my mind after getting more information. But I wonder how many of the donors to these organizations have considered the variety of different activities that “fighting cancer” can mean, and considered whether they’d rather give to an organization that’s focused on a particular one of them.