Despite these misgivings, we would be determined to make cost-effectiveness estimates work, if we thought this were the only way to figure out how to allocate resources for maximal impact. But we don’t. This post argues that when information quality is poor, the best way to maximize cost-effectiveness is to examine charities from as many different angles as possible – looking for ways in which their stories can be checked against reality – and support the charities that have a combination of reasonably high estimated cost-effectiveness and maximally robust evidence. This is the approach GiveWell has taken since our inception, and it is more similar to investigative journalism or early-stage research (other domains in which people look for surprising but valid claims in low-information environments) than to formal estimation of numerical quantities.

I don’t wish to present this illustration either as official GiveWell analysis or as “the reason” that we believe what we do. This is more of an illustration/explication of my views than a justification; GiveWell has implicitly (and intuitively) operated consistent with the conclusions of this analysis, long before we had a way of formalizing these conclusions or the model behind them. Furthermore, while the conclusions are broadly shared by GiveWell staff, the formal illustration of them should only be attributed to me. 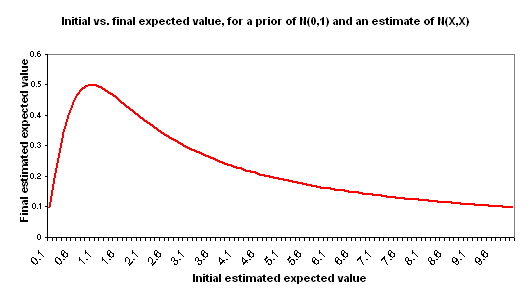 This is in some ways a counterintuitive result. A couple of ways of thinking about it:

Now suppose that you make another, independent estimate of the good accomplished by your $1000, for the same charity. Suppose that this estimate is equally rough and comes to the same conclusion: it again has a value of X and a standard deviation of X. So you have two separate, independent “initial estimates” of good accomplished, and both are N(X,X). Properly combining these two estimates into one yields an estimate with the same average (X) but less “estimate error” (standard deviation = X/sqrt(2)). Now the relationship between X and adjusted expected value changes: 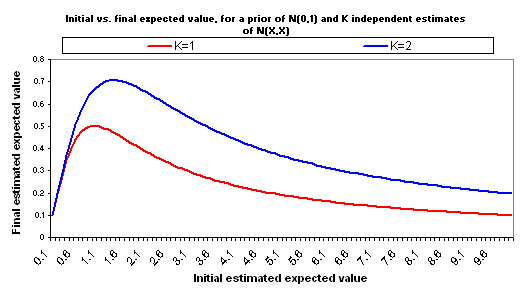 Now you have a higher maximum (for the final estimated good accomplished) and a later inflection point – higher estimates can be taken more seriously. But it’s still the case that “too high” initial estimates lead to lower final estimates.

The following charts show what happens if you manage to collect even more independent cost-effectiveness estimates, each one as rough as the others, each one with the same midpoint as the others (i.e., each is N(X,X)). 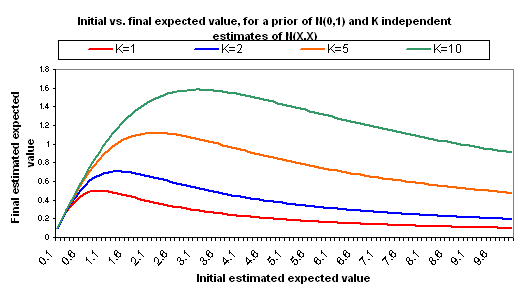 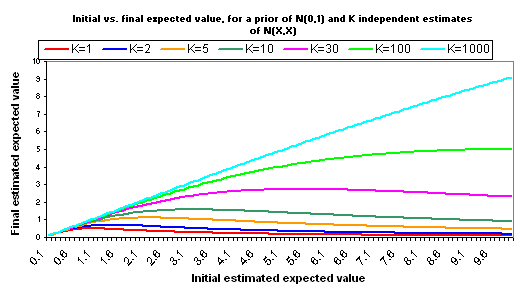 A few other notes:

The GiveWell approach
Since the beginning of our project, GiveWell has focused on maximizing the amount of good accomplished per dollar donated. Our original business plan (written in 2007 before we had raised any funding or gone full-time) lays out “ideal metrics” for charities such as

number of people whose jobs produce the income necessary to give them and their families a relatively comfortable lifestyle (including health, nourishment, relatively clean and comfortable shelter, some leisure time, and some room in the budget for luxuries), but would have been unemployed or working completely non-sustaining jobs without the charity’s activities, per dollar per year. (Systematic differences in family size would complicate this.)

Early on, we weren’t sure of whether we would find good enough information to quantify these sorts of things. After some experience, we came to the view that most cost-effectiveness analysis in the world of charity is extraordinarily rough, and we then began using a threshold approach, preferring charities whose cost-effectiveness is above a certain level but not distinguishing past that level. This approach is conceptually in line with the above analysis.

It has been remarked that “GiveWell takes a deliberately critical stance when evaluating any intervention type or charity.” This is true, and in line with how the above analysis implies one should maximize cost-effectiveness. We generally investigate charities whose estimated cost-effectiveness is quite high in the scheme of things, and so for these charities the most important input into their actual cost-effectiveness is the robustness of their case and the number of factors in their favor. We critically examine these charities’ claims and look for places in which they may turn out not to match reality; when we investigate these and find confirmation rather than refutation of charities’ claims, we are finding new data points that support what they’re saying. We’re thus doing something conceptually similar to “increasing K” according to the model above. We’ve recently written about all the different angles we examine when strongly recommending a charity.

We hope that the content we’ve published over the years, including recent content on cost-effectiveness (see the first paragraph of this post), has made it clear why we think we are in fact in a low-information environment, and why, therefore, the best approach is the one we’ve taken, which is more similar to investigative journalism or early-stage research (other domains in which people look for surprising but valid claims in low-information environments) than to formal estimation of numerical quantities.

As long as the impacts of charities remain relatively poorly understood, we feel that focusing on robustness of evidence holds more promise than focusing on quantification of impact.

*This implies that the variance of your estimate error depends on the estimate itself. I think this is a reasonable thing to suppose in the scenario under discussion. Estimating cost-effectiveness for different charities is likely to involve using quite disparate frameworks, and the value of your estimate does contain information about the possible size of the estimate error. In our model, what stays constant across back-of-the-envelope estimates is the probability that the “right estimate” would be 0; this seems reasonable to me.