GiveWell is dedicated to finding outstanding giving opportunities and publishing the full details of our analysis. In addition to evaluations of other charities, we publish substantial evaluation of our own work. This post lays out highlights from our 2017 metrics report, which reviews what we know about how our research impacted donors. Please note:

Summary of influence: In 2017, GiveWell influenced charitable giving in several ways. The following table summarizes our understanding of this influence. 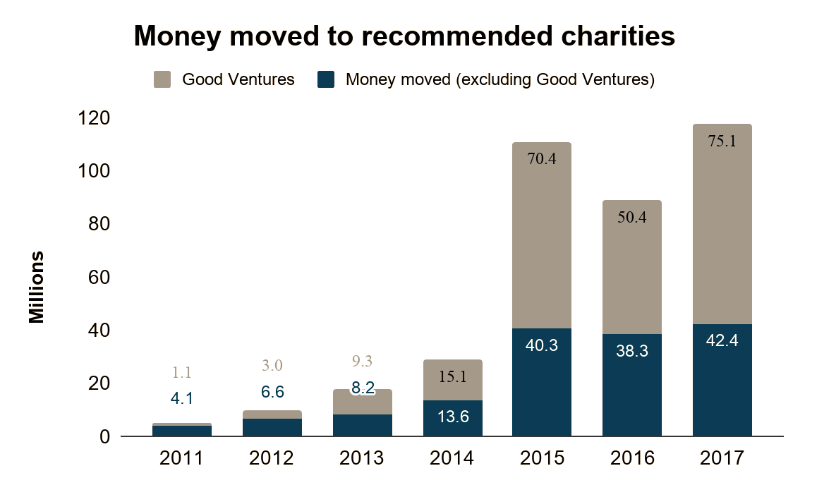 Money moved by size of donor: In 2017, the number of donors and amount donated increased across each donor size category, with the notable exception of donations from donors giving $1,000,000 or more. In 2017, 90% of our money moved (excluding Good Ventures) came from 20% of our donors, who gave $1,000 or more.

Our retention was stronger among donors who gave larger amounts or who first gave to our recommendations prior to 2015. Of larger donors (those who gave $10,000 or more in either of the last two years), about 73% who gave in 2016 gave again in 2017.

GiveWell’s expenses: GiveWell’s total operating expenses in 2017 were $4.6 million. Our expenses decreased from about $5.5 million in 2016 due to the Open Philanthropy Project becoming a separate organization in June 2017. We estimate that 67% of our total expenses ($3.1 million) supported our traditional top charity work and about 33% supported the Open Philanthropy Project. In 2016, we estimated that expenses for our traditional top charity work were about $2.0 million.

Web traffic: The number of unique visitors to our website remained flat in 2017 compared to 2016 (when excluding visitors driven by AdWords, Google’s online advertising product).